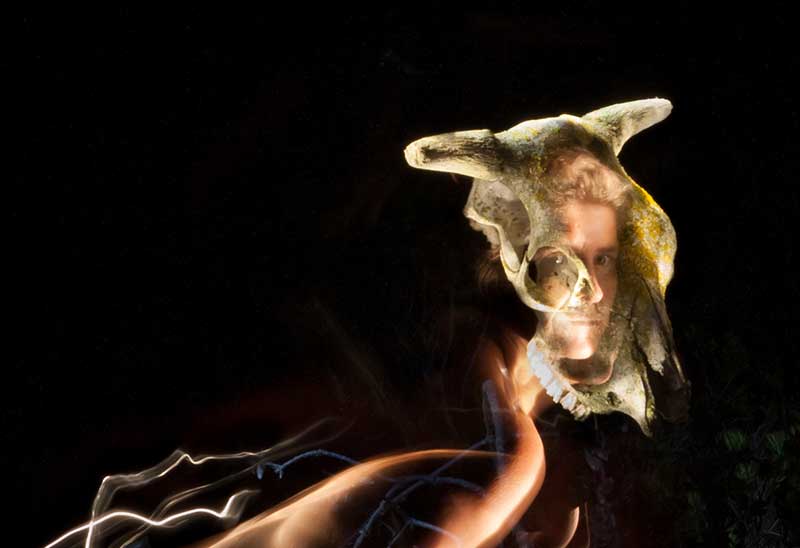 KALI VAN DER MERWE (b. Johannesburg 1964) re-named herself after the fierce Indian goddess of creation and destruction.

Kali's most recent exhibition 'After Life, an aperture on the mysteries life through the lens of death', was hosted at the historical Kings Map Room of Iziko South African Museum. This re-interpretation of the museum specimen guided by plays of imagination rather than organised by any systematic reason proved to be an extremely popular exhibition amongst adults and children alike. It garnered a number of positive reviews in the media and the exhibition was extended for a further 2 months at the museum for a total of 5 months.

Kali's formal education is grounded in a BAFA  majoring in sculpture from Michaelis School of Fine Arts, University of Cape Town. Post formal study, she worked in the mediums of ceramics, printmaking and sculpture, exhibiting at galleries nationally and internationally, taking part in a group show at MOMA, Oxford.

Kali unpicked her formal art education living an experimental lifestyle in the former East Berlin in the early  nineties. She began working with sound, filmed images, slides, photographs, light sculptures and serigraphs, collaborating with a number underground collectives of the time, creating installations in various cities including Amsterdam, Berlin and Zurich.

Returning to a democratic South Africa she extended her interest in filmmaking to make documentaries. Based in Cape Town, her work combined social issue filmmaking with creative social development and her collaborative documentaries won multiple local and international best film and jury awards at festivals over her 2 decade film career.

Eight years ago, a series of entheogen awakenings made it no longer possible to live in the noise and bustle of the city. Kali found creative refuge on a farm near the remote village of Baardskeerdersbos, in the Western Cape. In this rural space and silence, she embarked on an intense, three year series of archetypal, mythological, photographic self-portraits using 'light painting' as a transformative technique. During this time, she lost her eyesight and had it dramatically restored via cataract eye surgery. Extending the 'light painting' technique to fynbos, indigenous forests, wildlife and insects in her rural surroundings, Kali excels at making the real unreal.

Kali's exhibitions are environments of microcosmic and macrocosmic, macabre beauty displayed in multiple mediums appealing to all the senses including touch and smell. Kali views herself as a visual advocate on behalf of wild, fragile indigenous flora and fauna, encouraging people to observe, connect, and be immersed in sense of wonder.

“Doing it!” - Jury award at the Ismailia Film Festival, Egypt

“Doing it!” - Gold Stone award in from the National Television and Video Association South Africa (NTVA).

“Iduma Elingopiyo, The Wound that does not Bleed” - competing with feature films, the documentary came second in the Best Foreign Film category at the AdriaticoCinema Festival, Italy.

Baardskeerdersbos Art Route in the Overberg.

Photographed Deep Night, a contemporary dance theatre piece employing performance and multimedia elements to draw attention to the presence of HIV and AIDS in everyone’s lives.

Isisombulolo - Commissioned to document the work of the HIV/AIDS care, prevention and treatment project.

TB/HIV Care Association - Commissioned to create a body of work for the NPO.

"out of time", – video installation shown at the Brett Kebble Art Awards.

"Uhambo, Pieces of a Dream", a multi-media installation created for the Mothertongue Collective shown at the main festival in Grahamstown and at the Intimate Theatre, Hiddingh Hall Campus UCT, Cape Town.

"digitalove" – video installation shown at YDESIRE at the Castle of Good Hope as the 4th Softserve art event.

“Call me Dog” curated an exhibition of photographs taken by marginalised youth on the Cape Flats. The exhibition is shown on the Hiddingh Hall campus of UCT as part of the Month of Photography and at the e-centre set up by Naspers. The photographs were published in Marie Claire Italy.

“Iduma Elingopiyo, The Wound that does not Bleed” - Curated exhibition shown at the South African Library, Cape Town as part of 100 XC Photography in South Africa.

“Art from South Africa” - Work chosen for an exhibition at MOMA in Oxford, England.

while you still can – 4 min 06s looped, dimensions variable

“W-hole” - an experimental film on the exploration of the male arsehole screened at the Out in Africa Film Festival Gay and Lesbian Film Festival.

“Brown” - a cross-genre, historical and musical documentary, the issue of forced removals is explored. Through the eyes of Ernie, a successful and talented young singer her grandparents’ and parents’ story of dispossession unfolds. The resilience of the family emerges as well as the high price they paid. It was funded by the Open Society Foundation. “Brown” was screened on SABC 1.

“Doing it!” - a 52 minute documentary funded by the Open Society Foundation, National Film and Video Foundation, The City of Cape Town and The National Association of Child Care Workers, explores issues around female sexuality. It was screened on SABC 1 for two consecutive years to commemorate National Women’s Day. It is still consistently used by organisations and workshop facilitators to stimulate debate around sexuality and HIV/AIDS.

“The lost generation” - Directed and filmed  about forced adoption of children from mixed marriages during Apartheid years and  “The New Hippies” an exploration of the Rustlers Valley Music festival for Media Sat, Italy.

“The Bottom Line” - explores the excessive profiteering of pharmaceutical companies from AIDS drugs. The film was a commission for RAI Tre, Italy.

“Who’s News?” 26 min. - co–directed this documentary about women’s opinions of their representation the media. It was made for “Women’s Media Watch” a pressure group challenging racism, stereotyping and sexism in the media. The documentary is used to sensitise journalists around gender issues.

“Iduma Elingopiyo, The Wound that does not Bleed” 60 min. co–directed this documentary exploring the lives of children and youth living on the streets of Cape Town, filmed over a period of two years and funded by The Royal Netherlands Embassy. The documentary has been made into a book by the same name.

Co-founder of “Other-Wise media”, an organisation which produces awareness-raising media and trains youth and women in media skills. 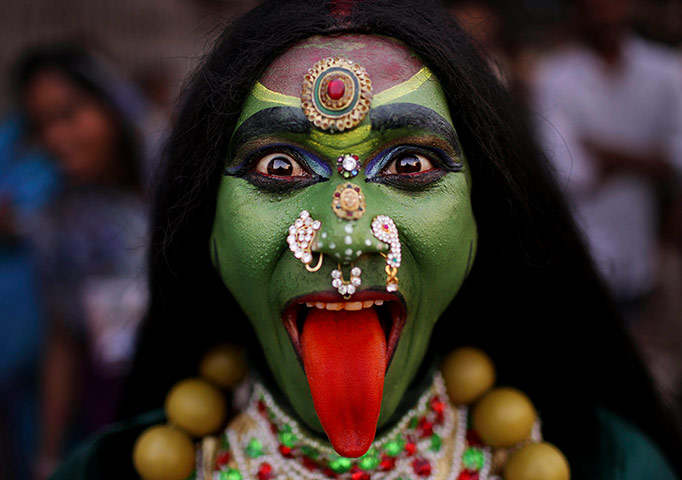 By you this universe is born, by you this world is created

By you it is protected, O Devi.

By you it is consumed at the end

You who are eternally the form of the whole world,

at the time of creation you are the form of the creative force,

at the time of preservation you are the form of the protective power,

and at the time of the dissolution of the world

you are the form of the destructive power.

You are the Supreme Knowledge, as well as ignorance,

The name Kali was first known in 4 AD

Kali is usually represented naked – stripped of all illusion – she is nature (prakriti). She gives birth to the cosmos – she has the male principle within her. Her hair is the fabric of space time which organises the matter out of chaos. Her garland of 50 human heads represent the 50 letters in the Sanskrit alphabet – this symbolises knowledge and wisdom. She wears a girdle of human hands signifying karma - hands being the instruments of work – accumulation of deeds. Her red lolling tongue represents the rajas – the activating quality in nature. She has 4 hands. In her left hand she holds a severed head – indicating the annihilation of ego bound evil forces. In her other hand she carries a bloody sickle sword which cuts off heads. She is limitless primordial power awakening unmanifest Shiva beneath her feet.

She is the archetypal image of birth and death, giver of life and destroyer. The vital principles of the visible universe which has many faces – gracious cruel – creative – destructive, loving – indifferent – the endless possibility of the active energy at the heart of the world. She can be benevolent and frightening.

She can be worshipped in the form of a naked female, the further away from the accepted norms of beauty the better. But the worshipper must feel the same awe and fear as when worshipping the terrible mother goddess. 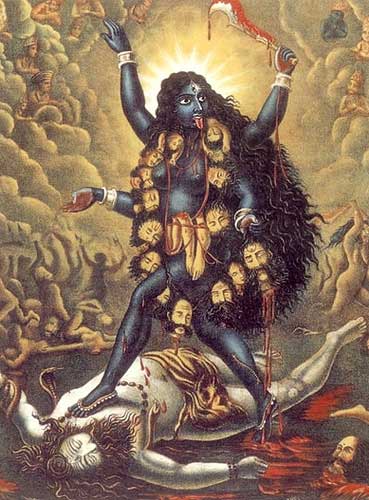 SUPPORT ME ON PATREON